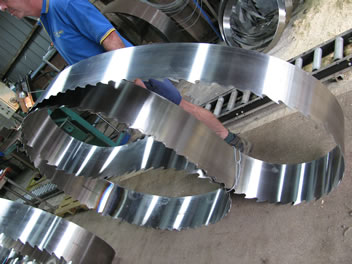 In 1964 the Henry family started a hardware store in Vineyard NSW, they also built a small sawmill under the name of Henry Bros & co (a Family company name that goes back to the 1950’s) to supply Vineyard Hardware with its own structural & fencing timbers for sale.

As the timber production grew, the need for in house sharpening & the manufacture of specialised tooling become apparent. In 1978 the first of the machinery was purchased to service recut bandsaws.

In 1982 Henry Bros & Co started taking on contract bandsaw sharpening for other timber yards in Sydney, as time moved on the saw shop expanded its capacity to circular saws, knife grinding & profile grinding, which lead to even more outside sharpening from joinery/cabinet makers, frame & truss manufactures pallet makers etc, to the point where it over took the timber production side of the business.

In 1998 Henry Bros & co started a new company called Henry Bros Saws to more reflect the nature of its business but still hold the connection to the family name.

In 2000, Henry Bros really started its expansion into state of the art CNC machinery from bandsaws to
TCT circular saws, knives, router bits and a growing list of products that continues to expand today.

Henry Bros Saws Australia is a worldwide-known & respected company in the saw & knife industry for its innovations and designs of products and the ability to step outside the square and develop new products with the help of its international partners, all of which are quite happy to work with us in the development of new cutting systems.

Henry Bros Saws Australia is proud to be Australian owned.

Henry Bros Saws Australia is comes from a sawmilling/joinery background which allows us to better understand the issues and problems that confront your business and therefore provide the right and best solutions.